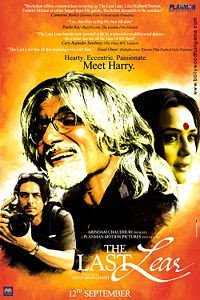 This blog was pending for some time now since I watched Rituparno Ghosh's latest experiment in story-telling 'The Last Lear'. This blog was meant mainly for the movie but with the recent advances leading Amitabh to the hospital and mourning his death today for a few minutes (of course a rumour), has led me to dedicate the blog to Amitabh Bachchan, whose acting incidentally happens to be the only thing in the movie to write about.
The Movie is based on a drama 'Ajker Shahjahan' by Utpal Dutt. It is about a stage artist, Harry, who lives Shakespere in every moment of his life. Due to some personal reasons he has already given up the stage and also has a great distaste for cinema. One day he meets Siddharth, a movie director much like the same in characteristics as himself. Siddharth manages to persuade him to do the lead role in his upcoming film. It was an unusual experience for Harry to watch a film being made and when asked by a journalist about the climax scene being done by a body double, he decides, against all odds, to do the life-threatening scene himself. He suffers the dread of trauma and ends up with a coma. The film is scheduled to be released on Diwali night besides the lead actor sleeping in coma. This is somewhat indigestible to Harry's partner Vandana. Moreover, Siddharth, the director, never even visited Harry's home after the accident to see him.
This is almost the whole about the story of the film which I think fails to connect with the masses and there are too many reasons for that. There is too much of Shakespere in the film and I don't really understand why. I have not read Shakespere's tragedy of King Lear but the wikipedia article on that led me to conclude that there was nothing in the film which could be connected to that story except for the fact that Harry wanted to enact King Lear once on stage but he couldn't do that. Maybe, Rituparno wanted to show the role of Harry as the circus clown in Siddharth's film as like King Lear but even that role didn't look like one; only the element of tragedy was similar. The personal rift of Preity Zinta (Harry's co-star in the film) with her husband and that between Divya Dutta (Harry's nurse) with her boyfriend has simply nothing to do with the story and it seems that it was done only to add some feminism to the movie, not understandable why.
Rituparno's projection as a director of different-looking films doesn't suffer much here. His style of film making truely comes out in this film with the ponderous speed and too much of the unnecessary melodrama in the film. Making a different film is not equivalent to making a good film and this is what Rituparno should understand sooner or later. The whole film is made in English and too much of shooting us done indoors (typical of Rituparno).
Amitabh as Harry (Harish Mishra) is adorably great and has done a job according to his capabilities after much time. Shefali as Vandana is good, Divya Dutta as Harry's nurse is wasted and useless. Arjun Rampal, as Siddhrth shocks me with his acting. I think its his best job till now in bollywood. Other actors are also good in their roles.
At last, Amitabh job is the only thing for which the film can be seen otherwise its better to skip it.
at 10:54 PM
Email ThisBlogThis!Share to TwitterShare to FacebookShare to Pinterest
Labels: Movie, Thoughtful