My Conflict With Sudhir Mishra 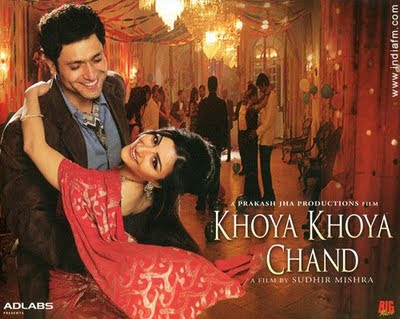 Recently, I saw Khoya Khoya Chand which was on my list of films to watch right from the time when it was released in 2007. I cant say why I could not watch this earlier but can only say well it could not just happen. Anyways, finally I have watched it and ever since then I am thinking about Sudhir Mishra and his films.
From a brief filmography as a director that he has, I have not seen many films but those I have seen, like K.K.C., had all been on my list for quite a long time before being watched. I had long been waiting to watch Dharavi and Hazaaron Khwahishen Aisi and could only watch them only a few months back. Few things were in common in these three films that I could notice.
The first thing was that all these films were artistically great as far as the individual performances are concerned. Be it Om Puri & Shabana Azmi in Dharavi or Kaykay Menon, Shiney Ahuja & Chitrangda Singh in Hazaaron... or Shiney & Soha in Khoya..., everytime Sudhir Mishra has done a great job in bringing us such fine performances.
The second thing that I could observe was Sudhir's commendable hold on the varied topic and the even more diverse backdrop of the films. The bumbaiya masti of the jhoparpatti in Dharavi can easily be seen in whole film. The student politics of Delhi university and the naxalite movement in Bihar became the issues in Hazaaron....... and indeed, I, till date, have not seen a better use of bihari accent of bhojpuriya hindi in bollywood. Everytime, this accent was used for comedy purposes in hindi films but Sudhir in Hazaaron..... gave it an altogether different look. Special mention of Dil Dosti Etc. which also saw a great use of that particular accent. Khoya... saw a periodic drama with the hindi film industry of 50's ad 60's as the backdrop and with the use of the brown filter in the whole film Sudhir managed to take us through that very era. Really commendable!!!
The third thing that I noticed in common to all these three films was my conflict with Sudhir Mishra. The movies are packed with such powerful performances from the leading artists of the industry everytime but fail to connect to me and, I am sure, to a large chunk of audience also. With such wonderful topics in hand and a commendable hold over them, why does the movies look out of sort and actually boring sometimes is the essence of my conflict with Sudhir. I look to him (rather he is presented) as a mature film maker, still he fails to maintain a momentum in his film that could have managed to bind audience with throughout the length of the film. Many a times while watching these movies, I was not able to understand what actually he wanted to show us. For eg in Khoya...., I was not able to make out what exactly was the film about. Was it about an exploited girl in the industry or centredness of the industry on a particular powerful star or the struggle that the newcomers face in this industry or a personal conflict between two talents or the industry of 50's as a whole? Such confusing issues are common in all the three Mishra films that I have seen and I can see only two reasons to that; either he himself is a bit confused about what he wants to show or he is trying to showcase his talent and while doing this ends up doing a lot of things that finally point into different directions and lead us into confusion.

We Are Not Indians!!!

Its 26th July, 2009............................All the news channels in India are celebrating 10 years of "Operation Vijay" in Kargil, remembering the martyrs and their martyrdom and condemning the govt for its negligence towards the celebration. Watching all this, I couldn't resist myself from remembering my time 10 years back.
I am one of the many privileged Indians to see our country coming out of a war with flying colours. I am also one of them who saw our country going through such a tough time. It was in June-July '99. As a 12 year old, I was not having that very much of understanding of what a war was and what our relationship with Pakistan was like. We at that tender age and being cricket fabs were only concerned with the Indo-Pak rivalry on the cricket field and had nothing of a political view or something like that. We had seen till then some of the war movies and so knew there was something between the two neighbours that was not good but the Delhi-Lahore bus service that was launched earlier that year brought some good for the realtionship between the two countries, at least for us, which certainly didn't later on.
I was in standard 7th then and had just finished our summer vacation. It was the time when something like a war emerged in Kashmir valley. We, at that time, had not the 24 hrs news channels like today and me, personaly, had no access to the cable connection at home. I was completely dependent on the 8:30 news on Doordarshan and the morning daily for the news on the war. In fact, it was the time when I started reading newspaper daily as a hobby. Listening and reading about how many soldiers gave away their lives without letting our country down, it certainly filled me with passion. In the school, I was the monitor along with my friend Mickey Anand. We decided to have a silence of 2 minutes every morning before our class started in order to condole rather celebrate the martyrdom of our soldiers. This act of ours became famous in the school and it became a regular practice in the whole school every morning to stand and remember our soldiers till the war ended. I can proudly say that we celebrated all the 527 martyrs and didn't wait for 10 years to do that.

One more thing that I still remember today about Kargil war. Our school collected some money from all the teachers and the students for the fund to support the Indian Army. We were expected to donate freely whatever we could or afford. I, at that time, had an envelope containing Rs. 51 given to me by somebody on my birthday as blessing and decided to donate that money to the fund. I did that and indeed in my section, I was the one who came up with the highest donation. I was again very proud to help my own armymen to the best I could do at that time.
Remembering this all today, 10 years since, again feels my heart with a feeling of proud but this feeling is diluted with a stronger feeling of shame for me. I didn't even once bother all these days to feel proud of our martyrs except when watching some war movie. I think many of us Indians of my age would be just like this. I am sure about my generation, I am not the only one and still there would be many more who are even worse than me. Do we really deserve to call ourselves Indians? Today, we all are condemning the govt and politicians for forgetting our heroes. But are we anywhere better than them? Well, it was expected like that from the f****** politicians but being the common man of our country, was it not our proud duty that we never felt proud of doing?
SHAME ON ALL OF US!!!!
F*** ALL OF US!!!!!!!!!