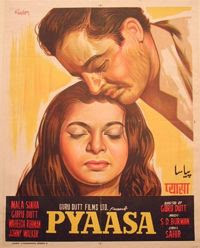 In my earlier post with the title ‘Depression’, I wrote about watching ‘Pyaasa’, a Guru Dutt directed and produced film. As I said there, I was, and in fact I am still, feeling a bit reluctant about writing something on doubtedly one of the best ever made Hindi movie of all times. I am still so enthralled after watching the movie and literally, spellbound by the magnificence of the movie that I am not sure of myself doing any sort of justice to the great work that Pyaasa is. Maybe, this is the reason behind my reluctance that I have already mentioned. Anyways, in reply to one of the comments to the earlier post that asked me to write something on this, I am attempting it here.

I first saw Pyaasa some 7 years back courtesy my elder brother. At that time I had no idea of what the movie was all about and, in fact, had not even heard about the movie, though of course, had always liked some of its songs, unknowingly about the movie of course, like ‘Hum Aapki Aankhon Me’ and ‘Jaane Wo Kaise Log The’. My second encounter with the film came soon in an India Today edition about the best hindi movies. It had a poll where the different Hindi movies were voted by the eminent film directors of the bollywood. I do remember some of the movies that made it to the top 10 list of the poll and Pyaasa was in that. I don’t really remember the sequence of the films in the list but it included the great works like Sholay, Mother India, Mughal-e-Azam, Pyaasa, Kaagaz ke Phool, Deewar, DDLJ, Lagaan (as far as I remember, the first two names here were the first two respectively in the list and Lagaan was the tenth). Only after reading that edition of India Today, I realized what a masterpiece I had watched a few days back. Anyways, this list is dwarfed by the list of top 100 movies of all times that was presented by Time magazine, and this list also included Pyaasa. I came to know about it only after going through this Wikipedia article on the movie. This article contains many interesting facts about the movie and also the plot, so, I won’t go into much detail of the plot of the story.

The movie is about a dejected young poem Vijay (Guru Dutt) who depicts a common-man character of a post-independence Indian youth who faces the problems of unemployment and hunger. One day he is mistaken to be dead and then his poems, with efforts of a prostitute, Gulaabo (Waheeda Rahman) who was in love with him, get published. He receives ‘posthumous’ success with the sympathy of the audience for a dead poet. For the greed of money and more money, his friends and the publisher deny to recognize him as Vijay when he comes back in the picture but his brothers and some other people, again for the desire of success and money brings him to the public as the real Vijay. Anguished by the sad treatment of the world when he was alive and hurt by the opportunism of his near-ones, he then himself denies that he is not the real Vijay.

The film beautifully portrays a common man character in a state that was the destiny of most of the Indian youth post-independence. India at that time was facing lots of social problem and it is beautifully (can I call such a dismal situation beautiful?) portrayed in the film especially with the song ‘Jinhe Naaz Hai Hind Par Wo Kahan Hain’, a beautiful song written by Sahir Ludhiyanavi and sung even better by Md. Rafi as like the other songs of the film.

Guru Dutt as the lead character of Vijay is more than fantastic. Mala Sinha as Meena, his college life love and Waheeda Rahman as Gulaabo, the prostitute who gets him the fame do complete justice to their roles. They both were new actors at that time and their roles in this film must have led the founding stone of the fame that they later got in their life. Rahman as the rich publisher was again brilliant. His role was something like I have seen him doing in most of his later and maybe earlier films. I can’t figure out his earlier films but later in 'Waqt', 'Chacha Bhatija', 'Sahib Biwi aur Ghulam' and many others that I am unable to recall at present, he played a similar rich villain fully suited and booted who thinks of his own profit in every situation. Johnny Walker as Sattar Bhai, Vijay’s friend who helps him to get out to the world when everybody had denied recognizing him does his role as he has done in over 100 bollywood flicks. He is able to make the audience grin at every scene he comes in. Mahmood and others also faired quite well.

The acting of each and every actor was splendid but the best assets of the film were its songs. The lyrics of Sahir Ludhiyanavi and the music of S.D. Burman together does a magic that still most of us have not yet forgotten. All the songs of the film are as great as the film itself. It is a bit surprising for such a film that is sad almost throughout, to have songs with every mood. For love you have ‘Hum Aapki Aankhon Me’, for comedy you have ‘Sar Jo Tera Chakraye’, a heart-broken ‘Jane Wo Kaise Log The’, a song that questions the society ‘Jinhe Naaj Hai Hind Par Wo Kaha Hain’ and a completely outrageous against the opportunistic world ‘Ye Duniya Agar Mil Bhi Jaaye To Kya Hai’, every song just every song deserves a separate post for admiration. Personally, many of these songs were from my list of favourites (they still are) but till few years ago when I first saw the film, I didn’t know that they all were from same movie. I am a lover of sad songs and the Hemant Kumar sung ‘Jane Wo Kaise Log The’ is always at top of my list. I think this is the most hummed song by me for which I still get frowns from my girlfriend who loves me a lot and doesn’t want to hear such lines from meJ.

The songs, no doubt, were the best part of the film. Something that was as good as these songs was the dialogue of the film by Abrar Alvi. He was Guru Dutt’s real life best friend and did a splendid job in every film that Guru Dutt ever produced (as far as I remember, later he also got to direct one of Guru Dutt’s produced films, I don’t really remember the name, just a wild guess…………Sahib Biwi aur Ghulam………..confessions in advance if the guess is totally wrongJ). Anyways, in Pyaasa his job as dialogue writer is just magnificent. Each and every dialogue has so much of pain inside it and really complements Sahir Ludhiyanavi in his emotional lyrics. Few instances have been given in the Wikipedia article on the film and the best to me was “main wo vijay nahi hoon”.

So much has already been written about the acting, singing, lyrics and dialogues in the film but the description is completely incomplete without any word on the direction. Guru Dutt as director is even better than he as an actor. Direction is fantastic and the picturisation of each and every film is truly outstanding. The picturisation of this film as in other of Dutt’s films is great. A great use of lights and camera angles and added to it the fantastic picturisation of shadows especially in the penultimate scene is great. The only flaws that I could get in the movie came in the credits itselfJ. Mala Sinha’s name appered the first in casting but I think the role of Waheeda Rahman was the most important of course after Guru Dutt. The other thing was that there was no any mention about the story and screenplay writer of the film.......……….

at 10:14 AM
Email ThisBlogThis!Share to TwitterShare to FacebookShare to Pinterest
Labels: Movie

Lots of praise but in this case it is totally deserved. From the contemporary perspective the idealism as shown in this film seems sentimental and naive but one has to understand the time it was made. The idealism of a newly freed country and the disappointment that came after those ideals were shown to be false. also sahir is i think the best bollywood lyricists ever, alongwith may be Kaifi Azmi and Gulzar and he is at his best in this film.

The time it was made is not important only for the ideologies that were backbone of the story but also important for the way that Guru Dutt made the film. He was probably the most innovative directors that India has ever had.
The use of close shots, cinemascope, and a beautiful picturisation of a song are somethings hat Dutt has given the bollywood. 'Waqt ne kiya kya hasi sitam' from 'Kaagaz ke Phool' is, I think, one of the most beautifully picturised songs ever.
Even colour films in India were also part of his innovative vision although, sadly, we lost him at such an early age, he could not see Indian films in colours.

Mala Sinha's name appears first even before Guru Dutt,s asshe was simply the biggest star working in pyaasa also guru dutt was really surprised that she would do such risky role just after tasting success so early in her carrer.

I recently came accross your blog and have been reading along. I thought I would leave my first comment. I dont know what to say except that I have enjoyed reading. Nice blog. I will keep visiting this blog very often.

@Betty,
Thanks Betty for visiting and praising my blog........hope for more comments from you.......

I put music from itunes on the really slow home computer onto CDs and want to put those CDs on my laptop.My laptop also has itunes. But the home computer is almost 7 years old. We think it runs so slowly b/c it has so much junk clogging up the hard drive. But it is possible it could have a virus that my parents don't know about. If I put the CDs onto my laptop, could it get infected with a virus? [url=http://gordoarsnaui.com]santoramaa[/url]