Last few weeks have been a bit hard for us in Bihar. I had always read in a general knowledge book about river ‘Kosi’ being called the sorrow of Bihar. It was the name given to the river in the past when it really devastated the north-eastern part of Bihar many a times. Anyway it was in the pages of history only and with dams made over it in my life of over 20 years I had never heard of a flood being caused by ‘Kosi’. This year Bihar is again witnessing the fury of its sorrow. Over lakhs of people have lost their homes, the number of them who lost their lives is not yet known, over lakhs hectares of agricultural land is submerged in the water and the fury doesn’t end here only. It would be remembered for much time to come. Anyways, the spirit of life is still there and I am sure we will get over it and move on. Indeed, the show must go on!!!!! 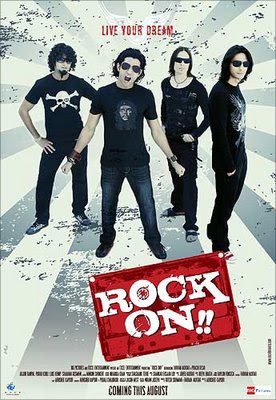 Now, this blog is about the recent bollywood flick Rock On directed by Abhishek Kapoor and produced by Farhaan Akhtar. It is a movie about four friends and their rock band ‘Magik’. Of late, we have seen some bollywood movies made on the theme of music and starhood in music. Lucky Ali’s ‘Sur’, Amitabh’s ‘Abhimaan’ and one movie starring Zakir hussain and Shabana Azmi, whose name(probably ‘Sur’ again), I am sorry, I can’t recall presently, are among some of them. All these movies have music, starhood and the ill-effects of this starhood in common. Rock On is again a similar movie but has a completely different flavour. Here, first up, we have Rock, an altogether unknown genre of music at least in bollywood. Secondly, we have a musical band that I don’t think is an Indian curry. We have witnessed some bands in India but they have disappeared as quickly as they came up. Another kind of similarity can be brought up about this film with Farhaan’s debut as director and producer ‘Dil Chahta Hai’. Though, these are completely different films but the ego that breaks the friends in this film is something similar to what happened to the characters in ‘Dil Chahta Hai’.
Rock On is a story about a rock band of four friends, Aditya, the lead singer (Farhaan Akhtar); Joe, with the guitar (Arjun Rampal); Killer Drummer alias KD, the drummer (Purab Kohli) and Rob, on the keyboard (Luke Kenny). In their college days they had maintained a band and reached to the verge of being stars but at the crucial time, the ego factor came in and what followed was a miserable spat that broke the band. After ten years, they are all at different paths leading their own lives without even meeting each other. Aditya works as a manager in a firm and is married to Sakshi (Prachi Desai); KD is involved in his father’s jewellery business; Rob continues his passion for music and works for a music director (played by Anu Malik); and Joe having the most miserable lives of all with his wife, mother and a son managing his family fish business with his wife. Aditya has kept his past of a band leader a secret from his wife but somehow she comes to know about it and with her efforts the band members meet again and once again perform together. There are some twists in the tale also that move the story on. Rob’s brain tumour, Joe’s wife’s Villainship to the band and some others. These twists come near the end of the movie when they are preparing for a concert. Their decision of performing in the concert is mainly for Rob who, they discover, has not much time left. On the other hand, Joe’s wife is reluctant to let him perform with ‘Magik’ again and wants him to join a job at a cruise the same day the concert was scheduled. Nevertheless, Magik performs once again after 10 years and creates the same magic.
The movie starts with a stage performance by the band on the street of Mumbai. After that their present day lives are shown and the whole story is then told as a mix of present and the flashbacks. The direction is really nice. The flashbacks are used really nicely and the way they are used to carry forward the story is something that I really loved. Farhaan as the rock star has really stunned me. His acting, to me, is fabulous especially when he has performed on the stage with the mike. He really looked a rock star. What stunned me more about him is his singing in the film. All his songs in the film are sung by himself and man! He has really done a great job there. Arjun Rampal, as usual, is emotionless and again fails to impress me. Luke Kenny and Purab Kohli have fared quite well with their job. Prachi Desai makes her debut in bollywood after showing her talent in the small screen. She has looked cute and beautiful and did full justice to her role although a short one. The best thing about the movie is Shankar-Ehsaan-Loy’s composition. The music really gives you a feel of rock and you can’t stop your feet moving with the beats of the songs. The last song the ‘magnum opus’ is really fantastic. The music is really fabulous, something new (although there have been such hindi songs earlier also but a whole movie dedicated to such music is something new) for our ears, “Rock in Hindi”.
In parts one can feel the story to be a bit on the slower side, nonetheless, the film is really good, if not ‘must watch’, it is more than ‘watchable’, somewhere in between these two grades.
at 10:17 AM
Email ThisBlogThis!Share to TwitterShare to FacebookShare to Pinterest
Labels: Movie

Beginning to end its lyrically Rocking movie all the way ...

Adding to your views, I would like to mention here a good transformation seen in the picturisation of the songs in bollywood movies involving playing of musical instruments by the actors. Previously, it was ludicrous to see artists moving their fingers arbitrarily on the guitar, or beating the drums in an altogether different rhythm to what the song actually demanded,..the examples being "Jhankaar Beats" and the legedary song "papa kehte hain" in which Aamir Khan was extensively arbit in playing guitar...But ROCK ON, I think corrected this flaw to a very large extent, thereby proving that the Indian janta is not stupid but demands logic and realistic acts. Acting after all is all about making things more realistic.

Yes, of course, I also agree to your point and this is what I wanted to say by saying that I was impressed by Farhaan’s acting especially when on the stage with the mike. All the actors were exceptional with their parts on the stage and everybody looked so comfortable and real with respective instruments. None of the songs looked pre-recorded and every single one of them seemed to be performed live at the stage. Arjun Rampal, when with guitar, looked quite well but without it, he failed to impress me with his acting. Luke Kenny always looked like a musician. The looks, especially the hairstyle of the actors was more so in making you believe that they were real rock stars.........