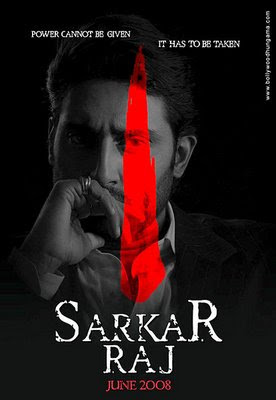 Hmmmm………………….Sarkar Raj………………Its better watch it than to read about it…………….A must watch for anybody who can seriously get involved in a film, otherwise, it can just pass you past in the theatre as does the cool breezes of the air-conditioner with its slightly complicated plot. Such nice suspense in a bollywood flick, I have seen after much time. The suspense of Abbas-Mustan duo, king of suspense in bollywood, is now a days a bit too fantasized. The twists come in the movies even where not required. For understanding it, fetch out for “Race”, though a good movie but with the number of twists it presents, you are going to beat your head and say every time ‘not again’. I don’t wanna recommend any of you this movie if you love to watch a serious suspense).

When it comes to the blend of politics and suspense, I have not seen better movies than Sarkar Raj in the bollywood. Every movie on politics comes up with conspiracy (much as in real life politics now a days), but this time it is something special. It seems RGV has thought over himself much seriously after the debacle of “AAG”, remake of Sholay. Surely, he is coming back to his self again. Looking forward to his next one……announced to be another one on underworld………

Now about Sarkar raj……..No doubt one of the best sequels (may be the first) in Indian film industry. RGV has not much to do here. He had just to carry forward the excellence that he created in Sarkar. The genre, the aura, the fragrance was well laid down there in Sarkar and he had only to repeat himself here. Barring a few sequences he has done only that. A bit more emotional flow in Sarkar raj is something that is a bit different here. The sarkar is seen weeping here (rightly so) with the death of his son which was something that was not present in “Sarkar”. Though there they said it all with their piercing eyes, here one may feel the emotions are a little overflowing…………Anyway, that’s acceptable. The eyes here again remain piercing as in the 1st part. The acting is again brilliant. Direction is as nice but the use of characters this time looks a bit injudicious giving more than enough to Abhishek Bachchan.

Abhishek Bachchan is better than what he was in Sarkar. He is improving with every film. I have liked him for some time now but I had not much of the reason to justify myself. Now with Guru, Sarkar and Sarkar Raj, I wanna thank him, I can now justify himself. He gives a complete image of Amitabh in his angry young man days. He gives us glimpse of Amitabh playing an emotionless don in Deewar. He is as emotional as his father in Deewar but does not let even a bit of it come out on his face much like his father did there. The scene where he reacts on somebody in the mob calling his father a ‘chor’ is one of the best from Abhishek in his whole career. Maybe, this is the reason that he has got a place above his father in this blog…………hehehe…….

Amitabh Bachchan, after a long time has done something that can be called his style of serious acting. The angry old man now is one of the highlights of the film in the later part where he takes revenge from the conspirators involved for the murder of his son. In the first part Abhishek does this job for his father’s foeman, here Amitabh does it with so much freshness. One thing that has deteriorated in this film as compared to its prequel is the way Amitabh kills his enemies. If an evil act like killing somebody can ever be called elegant, it was the way Abhishek killed his enemies in the climax of Sarkar. Here, in Sarkar Raj, that elegance was missing.

With Abhishek and Amitabh given so much ‘more than enough’ here, there remained a little for other actors to do. Though some of them did fantastically what they had to do. I was much impressed with Ravi Kale (Chander) in Sarkar. Here again, he has managed to do more than justice to his job as an evil man this time. He is as brilliant as he was. The character of Sayaji Shinde (Karunesh Kanga, Deputy C.M.) is not understandable to me. For me he was not required in the film. His acting, I think, is the weakest link in the film. I have never liked his acting except for Shool. Here again, he has failed to impress me. Maybe, he was there to do a bit of comedy, to cool one off in such a serious stuff. Maybe, he was there because of his friendship with RGV, I don’t know. He has not done well in either. Victor Banerjee (the industrialist) has done well with his job. Govind Namdev (Hasan Qazi) is unexpectedly well here. I didn’t like him much too like Sayaji but he has done well to impress. Upendra Limaye (kantilal vora) has done things much like Sayaji and failed to do justice with his role. Dilip Prabhavalkar (rao saab) has done well to maintain his repute of Gandhiji of “Lage Raho Munnabhai” for which he has won the national award for best supporting actor. Rajesh Shringarpore as the young, explosive, volatile leader Somji is quite good.

Aishwarya……..hmmm………She has looked beautiful, as usual. She looked as one of the family members of Bachchan in the beginning of movie where she looked like an angry and arrogant industrialist much like the arrogance over her real-life in-laws in many of their films. She has done full justice with her role but was eclipsed by Abhishek in every frame where they were together. Nonetheless, well done Aishwarya in an altogether different kind of a role!

All in all, this time RGV has not succeeded in bringing the better actors as he did in Sarkar. The whole herd of villain is not much impressive as it was very much in Sarkar made it soulful. Here. The very villainship was missing.

The story, this time, said to be original, is quite good. The Wikipedia article on the film says it to be impressed from the famous Enron issue. I have not heard about that issue, so, can’t comment over that. Nevertheless, some of the sequences like the public agitation against the govt. policy of establishing some industry in an established village reminded me of the Nandigram and Singur issue in West Bengal, still going on. Whatever the source may be the plot is superb as is the film.

In Indian film industry, the sequels have mostly failed to maintain the legacy of their respective prequel, Sarkar Raj is also not an exception. If compared to Sarkar, it ranks a bit low. Nonetheless, it still ranks high up among the movies based on politics and is a “MUST WATCH” one.

at 1:35 PM
Email ThisBlogThis!Share to TwitterShare to FacebookShare to Pinterest
Labels: Movie