Finally, got the opportunity to watch “Sarkar”, a Ram Gopal Varma directed and produced film. I wanted to watch the movie ever since it’s release in 2005. I don’t know why but couldn’t watch it that time and lack of motivation since then didn’t allow to watch it till now. The motivation was back and so was my desire to watch it with the release of its so-called sequel “Sarkar Raj”.

I don’t want to say that I am a big fan of RGV films though some of my favourites in the last 10-12 years have come from his factory especially those directed by him. Be it Rangeela(1995), Satya(’98), Company(’02), Bhoot(’03) and others, all of these are, I think, the best from a long list of the RGV films.

I watched Rangeela when I had not much of the wit to understand the whole film but liked it then only and got to understand the feelings of different characters and their portrayal of an extremely common theme of a love triangle in an even-more extremely different fashion which is one of the hallmarks of the RGV films. Maybe, the other reason why I like Rangeela is the presence of Aamir Khan, my most favourite bollywood actor……….

Satya came up with the favourite subject matter of RGV, the Mumbai based world of the underworld. The title character of Satya didn’t much impress me but what did impress me was undoubtedly, Manoj Bajpayee playing the role of Bhiku Mahatre and Saurabh Shukla playing the role of Kallu Mama. I am a bit confused about whom I liked more, Manoj Bajpayee as Bhiku Mahatre or Bhiku as a character himself. I was so impressed by this character that wherever I get a chance to dance I try to impersonify his famous style of unvanquishable bindaas dance…………….

Company was again based on the same underworld, this time, a bit more realistic with the rumours(or may be the fact, you never know with RGV) that it was based on the tussle between underworld dons Dawood Ibrahim and Chhota Rajan. The powerful acting of Vivek Oberoy in his debut film is something that I can never forget. The cool, calm and firm character of the bhai played by Ajay Devgan is another highlight of the film alongwith the powerful support from Manisha Koirala and another debutant Antara Mali. The next best thing about the film after Vivek Oberoy was RGV’s direction which saw his directoial revival after some flops like Daud, Mast, Jungle and Kaun. Another reason why I liked Company was that finally, Ramu was able to get rid of Urmila Matondkar (though not completely, she appeared in a song at the starting while the castings were running).

Bhoot, an old concept of horrifying the audience in a completely new face free from the shackles of Ramsay Bros. RGV was with Urmila again and I think after 8 years of Rangeela, they were again at thier best in a combo pack. Simply the most horrifying movie I have ever seen. Maybe, many people won’t agree with this but it’s a sole opinion of mine. Mahal (Ashok Kumar, Madhubala starrer) Gumnaam (Manoj Kumar starrer, my first ever encounter with such a movie) are among others which I have seen and put among top of the list. 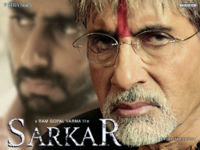 Now comes Sarkar, another of the RGV directed movie and a typical product of RGV Film Company. Apart from the story and the cast nothing is different. The same RGV style of making films. Apart from lead roles, the supporting cast is also quite the same. The same old breed of all the powerful actors from south and Marathi films alongwith the renowned stage performers can be seen again. Whenever you see such a cast, you, undoubtedly, can ascertain that it’s a RGV film.

Amitabh Bachchan and his portrayal of Sarkar is simply brilliant. The cool, calm yet devastating Amitabh shows a glimpse of Vijay from Deewar. Nothing much to tell about him and his acting………simply awesome…………….best part is his eyes speaking more than his tongue.

Abhishek Bachchan as Shankar, a loyal son, worthy son of worthy father, is at his lifetime best (Guru came long after Sarkar). The best part of his role comes in the 2nd half when he acts as sarkar though temporarily and starts taking revenge of his father’s attempted murder, especially the sequence after he killed his own brother and goes to his father to inform him about this. The sheer silence of all the characters says everything and then Abhishek says “मैंने भैया को मार दीया” is simply above all the sequences of the film and undoubtedly one of the best in the history of Indian films. The dialogue here was just not necessary as everything was already told from everybody eyes. The sequene is much comparabale to the silence in Vaastav when Reema Lagoo kills Sanjay Dutt or Mother India when Nargis kills Sunil dutt or Deewar after the death of Amitabh in the lap of his mother. The scene when Abhishek kills the character of Rashid (fantastically played by Zakir Hussain, who is one of the best in the cast) is also among the highlights of the movie.

Kaykay Menon is above any of the other from the cast. He has done complete justice to his character of an arrogant, stubborn, foul-mouthed Vishnu. I am short of adjectives to describe his character or his acting and I am sorry about this, I can’t help.

Supriya Pathak Kapoor, the dikhayi diye yun fame actress is among the finest actors in the industry and she has acted in the film as simply brilliant as she always does. I remembered her for “Jaane Bhi Do Yaaron” but now I will remember her for “Sarkar”. She has used her eyes to speak as if there is no place for tongue for her. She is superb………….

Katrina Kaif as pooja has not to do much in the film but to whatever she has to do she has done justice. Rukhsar as wife of Vishnu, Tanishaa as Abhishek childhood lover, Ishrat Ali as Khan, the right hand of Sarkar or Ravi Kale as chander who gives a glimpse of Nana Patekar are all superbly brilliant and so are many others. Writing about everybody is not possible for me. One word with which I can describe all of them is SUPERB.

Finally, the direction of RGV, do I really need to write anything about it? It is better to witness it yourself. He leaves behind his own direction of Company which I think is the best if seen from the perspective of his direction. All other of his hits have one or more characters that bring life to the film but in company it’s the direction of RGV that brings life. In Sarkar, there are characters to go with the exquisite direction of RGV that makes it one of his best films. The flawless use of different camera angles and the background score somewhat takes us to company. The film starts with a statement from him “Like countless directors all over the world, I am deeply impressed by “THE GODFATHER”. “SARKAR” is my tribute to it.” I have not seen Godfather so can’t comment much on it. I don’t want to get myself involved in the argument whether it was based upon Godfather or the real life character of Mumbai politician Bala Sahab Thackrey as neither I watched The Godfather nor I know much about Bala Sahab in detail. Although this wikipedia article about Sarkar shows that all its charcters were taken from The Godfather. Whatever the case may be, it’s a fantastic movie a must watch one.

at 11:54 AM
Email ThisBlogThis!Share to TwitterShare to FacebookShare to Pinterest
Labels: Movie

The most promising thing about RGV's direction in sarkar and sarkar raaj is despite the utter silence and sluggish nature of film it binds the audience to their seats till last minute of the film...hats off..

Ya, I agree to your point that Sarkar is bit slow but you have to tolerate that for the sheer acting brilliance that it comes up with it. The whole of 1st half is spent to create a good picture of the sarkar and a fantastic twist follows just after the interval. The movie gains much speed in the 2nd half and is great since.............

I used to like him a lot.. have seen most of his films till around 2002-03. Satya and Rangeela will definitely be in any list of best bollywood films ever. His later films now look like attempts in "showing off"... too self-consciously clever and that's why I tuned off. Also from around that time, I lost interest in Bollywood completely. Will definitely check out Sarkar soon...

Also one correction.. Supriya Pathak was not there in Jaane Bhi Do Yaaron. I think you are confusing her with either Neena Gupta or that other Marathi actress. You can check on IMDB or wikipedia.

Maybe, you are right in my confusion over Supriya Pathak being in Jaane Bhi Do Yaaron. Yes I am getting confused with the editor of the newsletter (perhaps the name was khabardar or something else, I really don't remember). Maybe you are true that she was some other Marathi actress but the faint memory of mine suggested me that she was Supriya. I had somewhere heard about Supriya Pathak being in that film. Surely, I am not confusing with Neena Gupta. Nevertheless, Supriya is a fabulous actor, no doubt, like her husband Pankaj Kapoor and her sister Ratna Pathak Shah another two of the wonderful theatre artists we have ever had in India.................Perhaps this time I am right...........hihihi..

her mother was a great actress too - Dina Pathak

by the way her name is Bhakti Barve

Heard the name of Dina Pathak. Is she the old lady "the mausi" in Golmaal?

yes. her other memorable roles are in Khubsoorat and Chitchor...

I have seen both the films.........Khoobsurat was great......a beautiful, adorable, simple and clean sarcasm.
Chitchor, I think was Rajshree productions film which was remade as "Main Prem Ki Diwani Hoon". The latter film, I didn't like much. I saw chitchor after that, so, was a bit pre-determined that the film is not that a good one.........Maybe, that was my fault as I could not enjoy a good movie (may be very good for others, but for me, I was not much impressed by the film, though the story and Amol Palekar were quite good)